As 2007 drew to a close, I received the sad news that Toy Shop Magazine would be ceasing publication after the March, 2008 issue which would ship in January. I discovered this when I contacted Editor Tom Bartsch to discuss some upcoming articles I had in the works for the magazine. The official explanation was a “lack of profitability”. While this is certainly understandable in today’s culture of immediate information access, it doesn’t make the demise of what was once a toy collector’s best resource any less disheartening.

I first crossed paths with Toy Shop Magazine in the early 90’s about a year or so after I had decided to try and recapture my childhood by collecting vintage toys. At the time, it was a black and white, newspaper style, publication that contained nothing but page after page of advertisements. One of the very first issues I purchased from a newsstand contained an ad from a Canadian dealer who had come across an entire warehouse full of mint Mego Action Jackson items that were still MIB (mint in the box to the uninformed!). Needless to say I was hooked and both a large order from the dealer and a subscription to the magazine quickly followed! 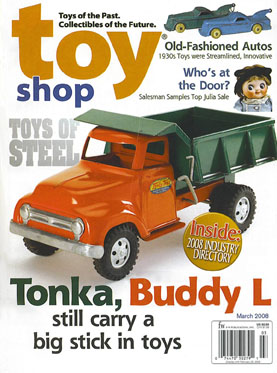 For many years thereafter, it became a ritual with me to stop whatever I was doing when the new issue arrived in the mail and peruse it from cover to cover seeking information and deals for my ever expanding collection. This was almost always followed by a series of long distance phone calls, varying degrees of negotiations, and usually ended with a satisfactory deal for both parties. These were the primitive and far more personal days before the Internet, when many a friendship was founded over tales of lost toys that had been buried or blown up in the backyards of America decades earlier!

As eager as collectors and dealers were to move and acquire product, this was also a time when the very hobby of vintage toy collecting was in its infancy and the exchange of information was often as important as that of merchandise. I would often get a call out of the blue from someone who had gotten my phone number from a dealer or another collector asking if I knew anything about a particular item. Notes jotted down on the backs of envelopes quickly became crudely produced newsletters, many of which later evolve into magazine articles or books on the subject.

Gradually, the Internet and online auction services like eBay began to creep in to the collector community and eventually became firmly entrenched. The landscape of collecting was beginning to shift at a rapidly increasing pace. Toy Shop Magazine began to see a significant decline in advertisers as many dealers took their wares online. This necessitated a change to a more conventional magazine style with articles on all avenues of collecting. This also lead to my assisting then Toy Shop Magazine columnist John Marshall with a long overdue article on vintage G.I. Joe knock off toy lines (my version would eventually be printed in its entirety on this website as “False Memories of G.I. Joe” ).

I became more intimately acquainted with Toy Shop Magazine several years later when I sent a letter to the Editor pointing out some major discrepancies in a review they had published on one of the Florida Extravaganza Collectibles Shows. An abridged version of my letter was printed along with a vague response from someone connected with the show. They did a very poor job of disputing my claims and almost seemed to agree with my points and compliment me on them! A few years later when another review of the current FX show was printed (by the same author who shall remain nameless), I sent a second letter in to the Editor and this time pointed out verbatim where this article completely contradicted almost everything that was stated in the previous years review. I explained in my letter how I, like many collectors, used the information on conventions provided by this magazine to make decisions on which shows to attend, since my disposable income was a finite and carefully allotted amount. Misrepresentation of the size, scope, or merchandise mix of an event could easily lead to costly miscalculations on the part of potential attendees and it was irresponsible of a magazine dedicated to collectors to allow this. My second letter never saw print but I did get an E-mail back from Editor Tom Bartsch with an invitation to write my own review of the event for the publication. Out of the fires of frustration was forged a working relationship that would last all the way until the end of the magazine.

True to their offer, my alternate take on that year’s FX show was published, including photographs, a few issues later. I tried to be honest and informative while still interjecting some observations and opinions. As a journalist, I have always refused to cater to any person, group or event based on their advertising practices with the publisher or any possible gain on my part. My loyalties lie with my fellow collectors and fans and I appreciate the decisions they potentially could make based on the information I provide. This hasn’t always made me the most popular person with certain companies or promoters but I refuse to sell out my integrity for a few freebies.

It wasn’t long after I came on board as a contributor that Toy Shop switched to a regular magazine sized format, complete with a color cover and interior pages. The revised publication looked impressive but inside it was clear that advertising was still decreasing on a monthly basis. I had long ago started to just skim the contents at my leisure, noting many ads had the exact same merchandise issue after issue, rather than devouring it like I once had. The articles were still good but the writing was clearly on the wall for the future. I probably should have stepped up my writing speed at this point but, as often happens, realizing the future and admitting to it don’t go hand in hand.

I wish I could say it was a complete surprise when I received Tom’s E-mail informing me of Toy Shop’s impending demise but it wasn’t. I didn’t expect it to happen quite as quickly as it did but I was certain it was coming. Just a few months earlier I had experienced problems with my subscription when it ceased to arrive in my mailbox. Several calls to the magazine revealed some mailing snafu but by the time it was corrected I had missed several issues and had trouble getting them replaced. Around this same time, a local comic book store was trying to start stocking the magazine since I wrote for them and no other venue in town seemed to carry it any more. It took the store months before they could get issues in on a regular basis. Neither of these instances were good omens but I still held out hope.

When the March, 2008 issue arrived at my door (I got my subscription straightened out just in time for the magazine to be canceled!), I took one last look at a publication that I had been reading for over a decade and half. This Toy Shop was only a shadow of the one I started with over a decade earlier. The Internet and eBay had taken their toll on the advertisers and most of the articles seemed half hearted (when you start to publish “previews” for conventions you know you are nearing the bottom of the subject matter barrel). Toy Shop Magazine had made a valiant attempt to roll with the punches over the years, but ultimately got knocked out.