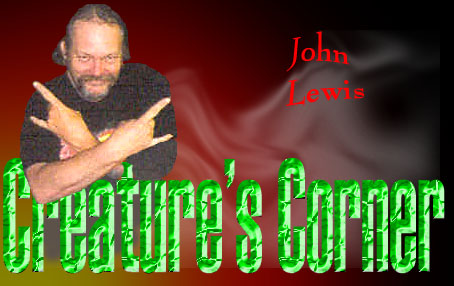 Hey Gang:
I hope this finds everyone doing well and reading another FANTASTIC issue of the PCR. (The Chief likes that a lot, really) (Hey! Only if it's true...which it always is!---N) I was going to talk about the usual comic and movie thing but my fellow denizens who dwell within the castle brought my attention to Will's excellent intro into the strange world of UFOs, (No, we're not talking Unstable Flatulent Orifices), those strange objects that many of us refer to as flying saucers. (Re: "La Floridiana" by William Moriaty, this issue---N) There has been a love affair with these objects for as long as people have left us visual, oral, and written accounts of their presence in our skies. Are they real? What are they? No one knows for certain. All we know is they are interesting, exciting, and quite controversial.

I always thought the PCR would be a great forum where very strange or paranormal events could be explored and dissected on a regular basis, but for some reason that has not been the case. (Certainly not for lack of us trying---N) Maybe now Will has opened the door for all of us to come forward and share either stories or opinions on these magnificent, aerial sightings.

There, now that I've given my introduction I'd like to share with the PCR family a story of a personal sighting that I witnessed along with a couple friends of mine.

UFO vs The Creature
Like Will, I am an outdoorsman and I to know the difference between various birds, bees, butterflies, rods, dragonflies (they are really cool), planes, jets, Choppers, blimps, and UFO's. ( I wish I had been around to see Zeppelins. Well, actually I did in 1973 at Tampa Stadium. Oops, we're talking UFO's...sorry about the digression.)

Anyway, here's my U. F. O. story. I'll spit out the facts and let you decide what you think it was. it happened during the summer of 1979 in the great state of Arizona. Two friends of mine and I were traveling north through the Kaibab National Forest on our way to the north rim of the Grand Canyon. We had just spent a full day on the South Rim and decided to go north as none of us had ever been there. We traveled for a couple hours through the beautiful forest on a quiet, winding highway. It was a bright, sunshiny day with hardly a cloud in the sky. We were talking about what reptiles we expected to collect while at the North Rim. It was around four in the afternoon.

We were about an hour from our destination when I just happened to turn my gaze skyward. I was sitting in the front seat on the passenger side so I had a full, unobstructed view of the sky through the windshield. What caught my eye was a reflection from the sun, which was shining very brightly that afternoon in early June, off some metallic object in the sky. It was probably at about 2,500 feet and maybe a mile or two down the road in front of us. It seemed to be moving along at a steady speed and following the road. I brought it to the attention of the car's other occupants and they both saw it. At first I thought it might be a police chopper but it had no rotors and was shaped quite different. To give an exact description would be hard seeing as how it was really not that close to us. To me it had somewhat of an egg shape to it but our only view was from behind the object as we followed it.

Our topic of conversation changed immediately, all of us offerring suggestions as to what the object might be. It remained in full view for nearly twenty seconds as it travelled along the deserted forest highway. The sun reflected off the object a couple more times. As we cotinued speculating as to the nature of the object it suddenly dipped to the east and disappeared over the vast forest. We continued talking about it when about a minute later a group of what looked like Fighter Jets flew across the highway at a height of around 10,000 feet in the direction the object veered to. The jets looked to be in quite a hurry, as though "chasing something."

Well, that's the simple facts of the story. Needless to say the subject was brought up many times during the rest of the trip. It was a real exciting moment to say the least.

I don't know what it was we saw but I have my suspicions. I'll let you in on one little secret: It wasn't a "Russian Rocket Booster." You figure it out. (Ha ha, ah yes, the controversial object seen many years ago on a September night. Visible from several states, primarily Florida, a glowing green-ish flying object flew/broke up overhead in the evening or early morning hours. Initially dismissed as a disintegrating "Russian Rocket Booster", the Ruskies disavowed knowledge of it entirely and, despite many eyewitnesses and good videotape of it, to this day this event has never been satisfactorily explained.---Nolan)

Til' next week, have a good one and "Keep an eye on those skies."